So now that the dry stonework is done, the next step is turning the top course into a bond beam, to support the cast concrete pieces that will be set on top of it.  My plan is to make two 3″ layers, the first overhanging the dry stone by 1 1/4″ or so, then the next cope will overhang the lower one about the same amount. I’ll get more specific about these pieces and what they will look like after the slab is poured.  The reason I had to create the bond beam is that the stone I have is small, and not really the best for what I need to do…which is support the large cast pieces. If I had it, my first choice to cap the drystone base would have been large pieces of flagstone, which would function as a slab. Normally, mortar is not included in my drystone work, but sometimes you have to make exceptions to the rules.

The bond beam is made of Type S mortar with a little Portland cement mixed in to bump up the compressive strength. After that was finished, I leveled out the infill, careful to pack every void. Then I double layered heavy plastic over the infill and covered it with a thin layer of washed, crushed stone to make a level surface.  The plastic will serve as a capillary break between the slab, and moisture that wicks up the masonry below. 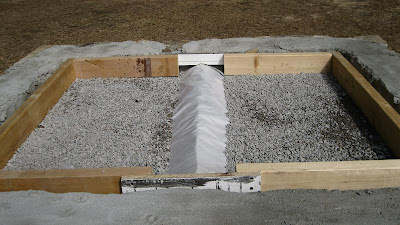 The form is spaced so that I can remove it without the sides jamming between the two sides of the bond beam. It will also serve as a drain…like a french drain…and it will allow any water that makes it past the cast concrete layers to drain through the dry stone base. No freeze thaw issues to worry about here, and the amount of water will be minimal at best. 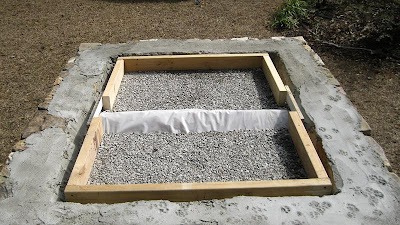 Now for the reinforcement.  I am using 1/2″ rebar that I had on hand, and spaced it out around 8″ OC in a grid. This will add some tensile strength should there be any settling later on, and when I add more weight when I build the oven. The center of the slab will be the thinnest at 2″ so the rebar will really be good in that area. Here you see the rebar is laid out…. 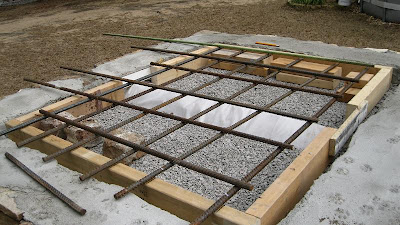 Then cut to size, just inside the edges of the form. You don’t want to expose rebar to air…that causes it to oxidize (rust). 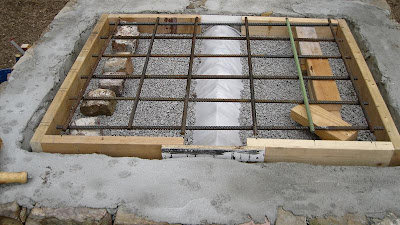 Next I used some 6″ bar ties I had left over and secured all the intersections with one tie. 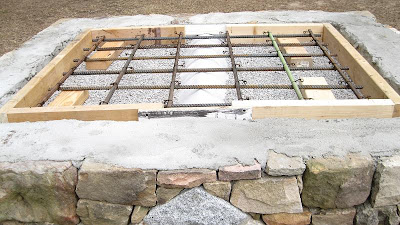 After I pour the slab and pull the form, the drain channel will be filled with broken bits of stone and topped with some crushed stone to level it out. 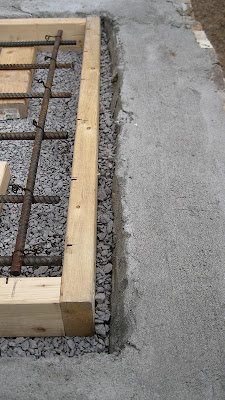 The slab will be poured tomorrow or Monday. Watch for an update sometime midweek! 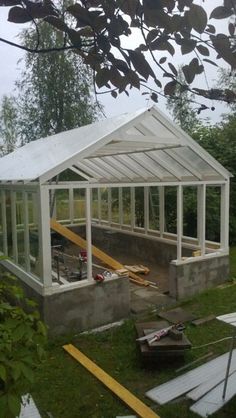