I love pizza…. I love fire. It is just that I need to be careful, and for that, why not try these out? I really love wood fired pizza. I thought now would be a good time to write about wood fired ovens ( WFO ) considering the growing popularity of them and who doesn’t like pizza?! I also decided to make this a multi-part posting because I plan to do a detailed construction walk through and it would be a bit much to cram it all into one post.  Don’t worry Neo, the answers are coming!  Plus, my fingers are built for stonework and not typing….I don’t want my wife to hear me moaning about pecking out 10 words a minute and how my widdle fingies hurt!  I thought I would start with the first freestanding WFO building experience……

It was the spring of 2004 and I was meeting with one of my oldest and best clients Ed J, to discuss the next phase of his continuing stone projects and some for the future. We went over his plans for a sunken patio with fire-pit, retaining walls and patio ( future project post ). What came next took me off guard… ” I want a pizza oven, Matt.” said Ed with a sly grin, ” and your gonna build it.”  Great!  That sounded awesome! Hang on a minute….” I have never built one before.” I thought to myself….” Sure Ed, I can do that!” is what I blurted out.  The oven would be built next year….with a deadline of course. His son, Edward, would be graduating college and Ed wanted this oven finished for the party. And so, I began to throw myself into research mode because as much as I like to wing it sometimes, this project had a party purpose and with that comes some pressure. I mean, there will be a lot of people at this thing..staring at it…waiting for pizza to come out. And these are folks that know a good pie. So that year we finished the terraces, patio and fire pit and prepared an area for the oven. Here is where is was suppose to be…in that little set back to the right in front of the retaining wall…… Oh Grasshopper, how little do you know…… For you dry stone enthusiasts, every wall and patio is dry laid. Only the veneer work is mortared. 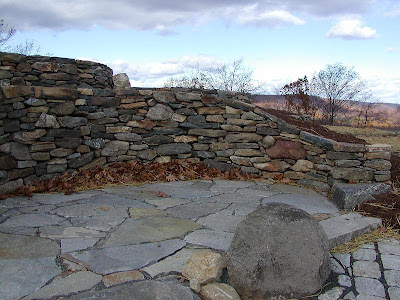 So, the first thing I did was scour the internet for information on wood fired ovens..how they function, how they are built, sizes, shapes….MAN!!! There is a lot of information to read about this kind of construction. So I started doing what I normally do when researching or learning something new with stonework or masonry construction. I look for consistency…find technique that is rooted in logic and time tested… not ones that are based on opinion….then compare it to what I already know. My experience with ovens before this was restoration of historical beehive ovens in 17th & 18th century houses.  They are nothing like the modern brick ovens in terms of efficiency and we’ll get into that sometime in the future.

Now, Ed had said PIZZA OVEN not Wood Fired Pizza oven. By his own admission he prefers instant gratification…hook up the gas line and voila!! Instant flame and heat. Little did he know, I was arming myself with information to counter the resistance I was surely going to encounter. I really, REALLY wanted him to go with wood because it’s old school…it has cool factor…and best of all it’s no harder to use than gas. Gas is convenient but so…boring. How about a fire?..click!!!  Now I have to convince him…fact gathering time.

It was now 2005….the year of the oven on my calender. Discussing the type of fuel used for the oven actually didn’t go as I expected. After reasoning it out and assuring him that wood would be better for many reasons, he decided to go with a WFO. If I had a football in hand, I would have spiked it…YES!!!! IN YOUR FACE PROPANE!!! Maybe it was me…maybe it was the wine…hehehe..either way, I was happy!   I had also decided that I didn’t want to build the oven itself from scratch. I would save that experiment for my house. At least if the dome collapsed on a pizza it wouldn’t be in front of hungry guests at a party. “Hey, who built this oven?”, someone would say…” I’m not sure”, would say another, ” but I’d put my money on that it’s that guy Ed is choking right now.”

With that visual in my head I found a couple companies online that have been selling WFO ovens for years.

The oven I chose was imported from Italy, made of thick refractory clay and came as part of a kit which included an insulation blanket, metal vent and door. But first the bad news I needed to deliver to Ed before we started. My lack of experience in WFO construction came back to bite me. I didn’t leave near enough room for the footprint of the structure. This means I now have to tell Ed that we must tear apart the wall from last year and excavate into the planting bed to make room. Random guy asks, ” Hey, have you seen where Matt went?” Other random guy says “Yeah, Ed’s busy choking him right now. ” Fade to my unconscious figure…..

The oven chamber itself was the only thing I didn’t build on this monster which was nicknamed the Pizza Bunker. I think FEMA engineers would have been proud of this bad boy.  13″ solid slab with a double layer of rebar sitting on solid bedrock. Core filled block with rebar and a 7″ thick slab supporting the oven itself. If there was a better place to hunker down during a natural disaster, I sure wasn’t looking..this is were I  would be!!

Here we have the slab and the bomb-hole we made to make room for the oven. The plywood on the left is a footing for the best flat top grill built into the counter. 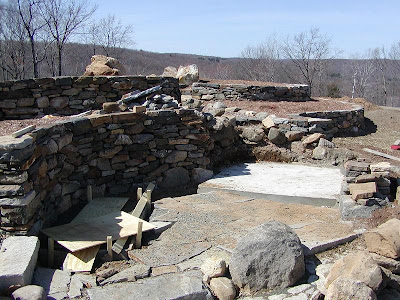 Next up is the block and slab work. These pics are the only ones I have of this stage. It shows the oven with insulation blanket and metal vent installed and the beginning of the stonework, which Ed wanted rustic to match the house veneer and fireplace inside.  All the stone for his home was gathered from the property, and we had a huge pile to pick fro at one time. This was the last of it. 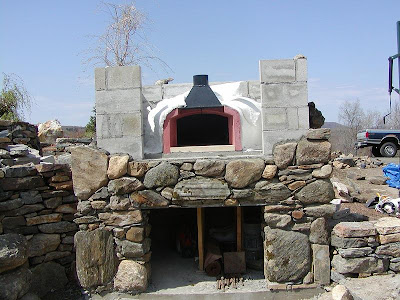 The block-work is started for the built-in grill and the stack of boulders in the center is a support for the granite counter-top. We added a couple more to reach final counter height. 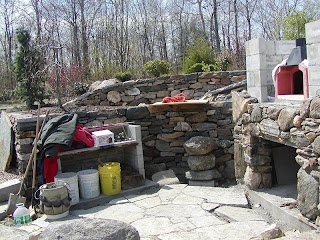 Once we got the specific needs of the actual oven out of the way, the stonework and finishing was smooth sailing. Ed had his guys, who are professional roofers (and who worked for some of the best Broomfield commercial roofing companies), do the framing, trim and shingles for us. They used hand split cedar for the shingles and they added a great look to the prow roof, after taking inspiration from this article. The trim paint matched the house and garage. This shot was taken while I was cleaning the chimney. The guys were just finishing the paint and wiring for a light above the oven door. 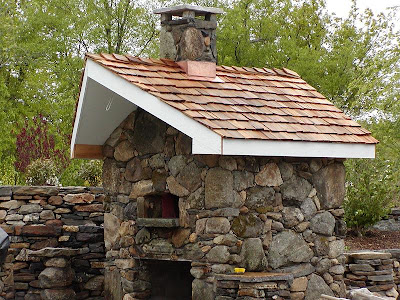 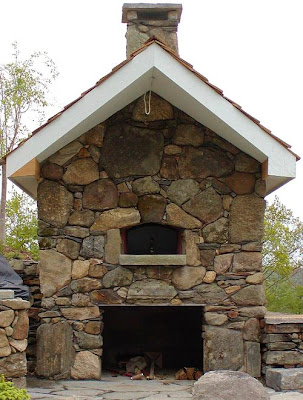 A close up of the veneer. The big stone on the left took 3 of us to lift in there. I estimated  it weighed roughly 200lbs. The veneer was 8″-9″ and this big guy was right up against the block. 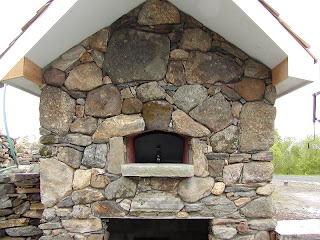 Shot from the back. Sorry about that wall Ed!! 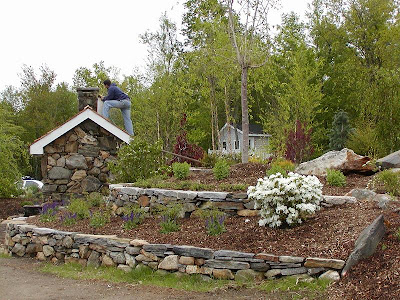 We finished on time for the graduation party which was quite the affair. Ed  pulled out all the stops…DJ and dance floor, high end catering, full bar with vodka luge..yup..really. He even had a friend that owned a local deli who was running the oven, cranking out fresh pizza for everybody. Frankly, it wasn’t very fair to the caterer, they had fantastic food too. But the oven and the pizza just stole the show. Random guy asks “Hey, anybody see Ed?” Other random guy replies “Yeah, I think he’s over there…being choked by the caterer.”

This is pretty much the only pic I have of his oven now. Every time I go over there and want to get a finished shot for the portfolio, it is in a state of dishevelment. That’s a good thing for me too..because that tells me that it’s being used, enjoyed and shared .  I had to give him a hard time about the orange mulch which his lawn guy brought him a couple years after we put in nice natural brown (undyed) mulch.
What is this, dude……a gas station? 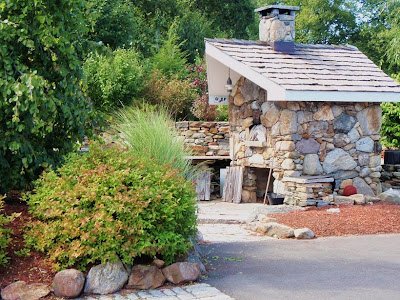 Enjoy your oven Ed. Thanks for the trust and the generosity you have always showed my family.

Construction walk through coming in part 2…………. 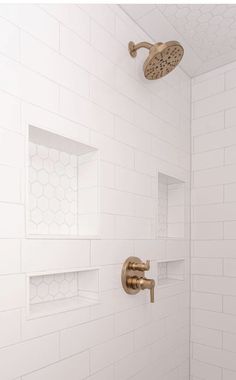